Princess has just announced their 2022 & 2023 Australia & New Zealand cruising programs, and it’s going to be the largest ever, with a full 12 months of cruises on offer!

The year-long season will feature four ships & 108 destinations in 33 countries with 90 unique itineraries.

No less than 40 different Australian ports will be called upon, plus 30 in New Zealand and 18 in the South Pacific, in addition to the ever-popular repositioning cruises to or from Asia, with the convenience of sailing from Sydney, Brisbane, Melbourne, Adelaide & Fremantle. There’s even a round trip world cruise option (departing Australia) with Coral Princess! 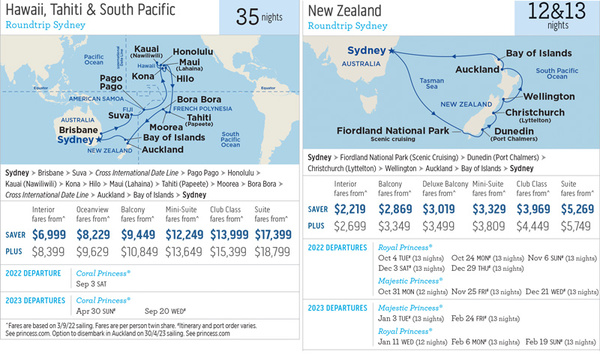 And many more from Adelaide & Perth and dont forget the World Cruise leaving from AUstralia!

DROP US A LINE